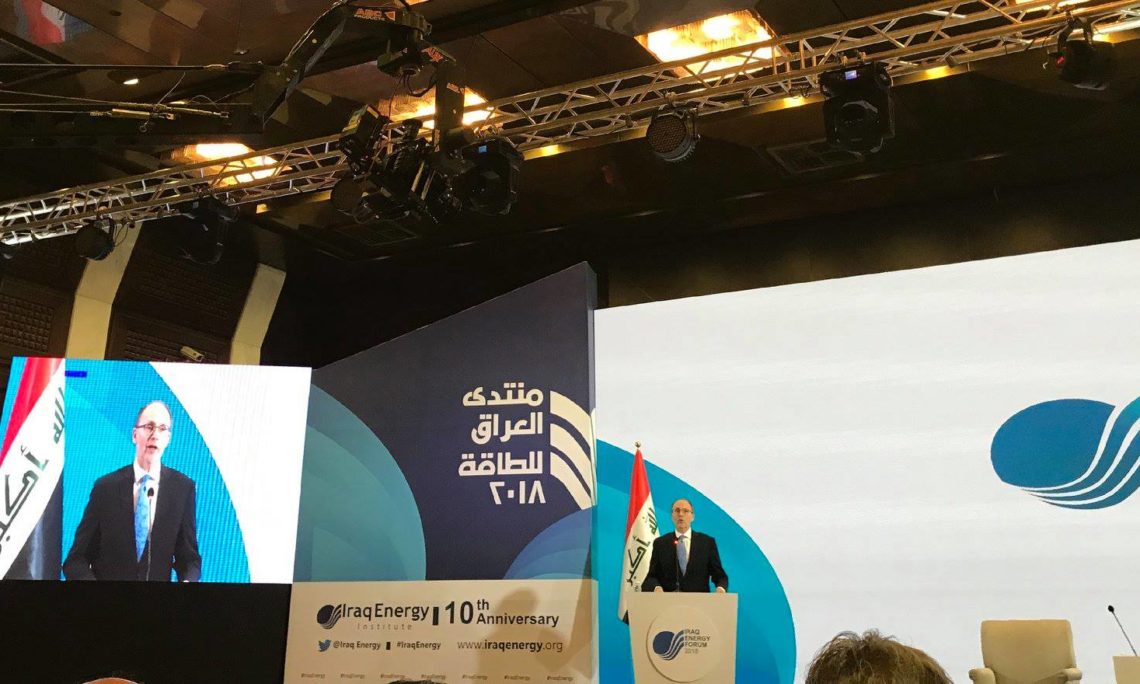 Your Excellency Qasim al-Fahdawi, Dr. Jafar, distinguished panel members and guests, it is a true pleasure to be here today to address this impressive group of leaders and energy experts.

When I addressed this forum last year, I spoke about the need for economic reform.  I said that Iraq needed a new economic paradigm, based on private sector development and economic diversification.  I noted that Iraq had to move away from a government-controlled economy.  That it had to allow and attractprivate investment, particularly in the energy sector.  Everything that I said last year remains true, but this year, I have a new message to deliver: now is the time to make these changes, before it is too late.

Let me tell you why these changes need to happen quickly: First, oil dominates the Iraqi economy, but provides very few jobs.  Oil accounts for 85% of government revenue and 65% of total Gross Domestic Product, but only about 1% of employment.  The problem is, hundreds of thousands of young Iraqis enter the job market every year, and the traditional employer, the government, is simply not hiring.

public sector investment resources away from other areas of the economy, particularly the rebuilding after ISIS.Here, then, is the dilemma that many Iraqi government officials believe they are facing:  that Iraq must choose either to spend its scarce public sector resources to increase oil and gas production, or rebuild the country. I am here to tell you that this is a false choice.

Iraq can increase its oil production AND rebuild the country AND create jobs, but only if it allows and attracts private sector investment.  Let me take each of those in turn.

First, Iraq must allow private sector investment by modernizing its regulations and contracting practices and by actually signing detailed and profitable purchase and investment contracts with private sector investors. Now, there was a lot of enthusiasm and energy – and a lot of potential project and export financing – coming out of the Kuwait Conference.

But Iraq must move now to capture that enthusiasm and unlock that financing before it disappears.

One American company told us this week that it was simply getting tired of waiting for the Iraqi government to make the decisions needed to finalize a contract.

And that brings us to my second goal for the Iraqi government:  it must attractinvestment, not merely offer a list of project opportunities. Iraq has to recognize that there is serious international competition for private sector resources, and that business is not charity.  There are basically two factors that investors evaluate when looking at a business opportunity.

The first is return on investment – how much profit will the business earn for its investment. The second factor is risk – what are the chances a business will lose all or part of its investment or make a lower than expected return.  The higher the risk, the greater the return a company will demand for its money and effort.  This is called the risk/reward ratio.  To be clear, I am speaking here in terms of financial risk, not security risk, although a higher security risk means added costs.  So, why is this a problem for Iraq, which has vast oil and gas resources?

The answer is, they will not, and do not.

Even Iraqi investors invest their capital in Dubai, Amman or Beirut because it is much easier to make a profit there than in Iraq. But, now for a bit of good news:foreign and Iraqi companies are ready, willing and able to share with the Iraqi government the risks of lower oil prices and the cost of increasing production, but in doing so, they also demand to share in the rewards of those risks. By re-structuring its hydrocarbon contracts in a way that permits investors to share the reward when prices and production go up, those investors will also share the risk when prices go down.

So, to attract investors, Iraq must either lower the financial risks – for example, through deregulation, new contract models, or public private partnerships, or it must offer higher returns by sharing a part of the profit from increased investment and production.

The Ministry of Oil is starting to understand this issue and the lack of profitability of the traditional technical service contract model, and is working to develop a new contractual framework. But it must come quickly to be of most benefit to Iraqis who have suffered years of war against ISIS.  And there is also more potential good news. Expanded private sector capital in oil and gas would permit Iraq to expand investment into non-oil related business or into reconstruction, both of which would create more jobs for young Iraqis.

And I have even more good news.  There are companies – I know of at least four American companies – that are willing to build infrastructure, produce oil and gas, capture flare gas, or turn sunlight into electricity without any investment from the government of Iraq.  Not one dinar.

These companies are offering excellent opportunities to Iraq, but none of them has yet been able to conclude a contract with the government.  It is time that the Iraqi government and Iraqi ministries seal these deals, which will act as magnets to other investors.

Before I close, I want to also talk briefly about the electricity sector.  And I want to congratulate His Excellency Minister al-Fahdawi for the progress his ministry has made, especially working alongside General Electric and the Iraqi independent power producers, to increase Iraq’s power generation capacity.  Last summer, Iraq produced 15,000 megawatts of electricity for the first time.  But fuel and tariff subsidies and low rates of collection cost the Iraqi government 8 billion dollars per year. 8 billion dollars is almost 10 percent of the government’s budget.

Just think of the investment and reconstruction projects that could be completed if the budget was 10 percent larger.  We support and encourage Iraq’s efforts to put the power sector on a fiscally sustainable path by improving collection and decreasing the cost of production by increasing the supply and use of natural gas.  Again, this is an area where Iraq can – and, frankly, must – leverage private sector investment.

Let me quickly wind up my remarks before they turn into a full-blown economics lecture. The energy sector is vital to Iraq’s future, but Iraq’s leaders must learn to allow and attract private capital investment in the hydrocarbon sector, as in all sectors of the economy.  By leveraging the power of private enterprise, Iraq’s leaders can grow the economy, create jobs, diversify public sector investment, and diminish the risks of an oil-dependent economy.

The United States stands ready to help the government implement reform and to encourage the participation of American companies in the rebuilding and development of a new, modern, and prosperous Iraq.

Thank you very much.