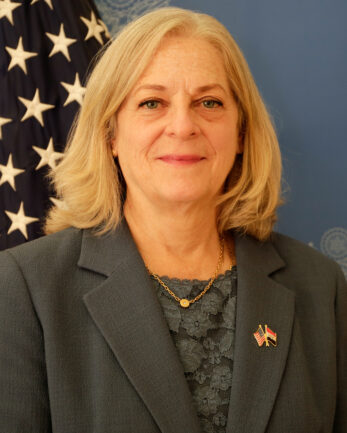 Ambassador Alina L. Romanowski, a career member of the Senior Executive Service, assumed her post as U.S. Ambassador to the Republic of Iraq on June 2, 2022.  She served as U.S. Ambassador to the State of Kuwait from January 2020 to March 2022.  Prior to her Ambassadorial appointments, she served as the Department of State’s Principal Deputy Coordinator for Counterterrorism (2016-2020), where she oversaw the coordination and integration of U.S. counterterrorism policy objectives and assistance programs with key international partners.

Over 40 years of service across various U.S government agencies, Ambassador Romanowski has become an expert on Middle East affairs.  At the State Department, Ambassador Romanowski served as the Coordinator for U.S. Assistance to Europe and Eurasia (2015-2016).  She also held Deputy Assistant Secretary positions in the Bureau of Education and Cultural Affairs (2005-2011) and served as acting Deputy Assistant Secretary in the Bureau of Near Eastern Affairs (2004-2005).  She joined the Department of State in 2003 to establish the Middle East Partnership Initiative Office and served as its first Director (2003-2005).

At the U.S. Agency for International Development (2011-2015), she served as Deputy Assistant Administrator for the Middle East Bureau, including as the acting Assistant Administrator for the bureau.  Ambassador Romanowski also served at the Defense Department from 1990-2003, including in senior positions. She was the founding Director of the Near East/South Asia Center for Strategic Studies at the National Defense University; Deputy Assistant Secretary of Defense for Near Eastern and South Asian Affairs in the Office of the Secretary of Defense; the Director of the NESA Office, and country director for Israel.  She began her U.S. government career as an analyst at the Central Intelligence Agency (1980-1990).