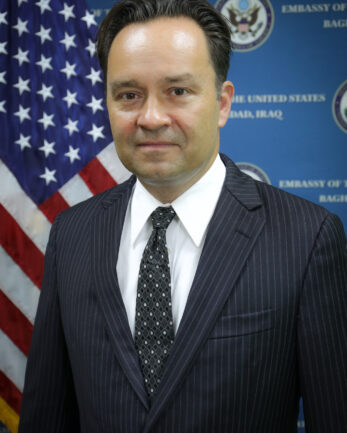 Gregory D. LoGerfo is a career member of the Senior Foreign Service.  Prior to arriving in Iraq, he served as Deputy Chief of Mission in Tunis, Tunisia from 2019 to 2021.  Mr. LoGerfo served as Chief of Staff to Deputy Secretary of State Sullivan from 2017 to 2019, and as Director for Maghreb Affairs in the Bureau of Near Eastern Affairs from 2015 to 2017.  He served as Counselor for Political and Economic Affairs in The Hague, the Netherlands from 2012 to 2015.  Mr. LoGerfo’s other overseas assignments include Deputy Political Counselor in Baghdad (2010-2011), Political Officer in Cairo, Egypt (2007-2010) and in Amman, Jordan (2001-2002).  He served in Washington in the Department of State’s Office of Israel and Palestinian Affairs as Senior Economic Officer (2003-2005), and as Director for Israel, Palestinian and Jordanian Affairs at the National Security Council (2006).  Mr. LoGerfo’s performance recognitions include the Distinguished Honor Award in 2019, and the James A. Baker award for outstanding Deputy Chief of Mission in 2021.

Mr. LoGerfo received his law degree from the College of William and Mary and his bachelor’s degree from the University of Miami (majoring in economics and history).  He was raised in Belmont, Massachusetts and attended Boston College High School.  Mr. LoGerfo is married to Randa Fakes, a piano teacher and artist.  They have two boys, Frank and Louis.