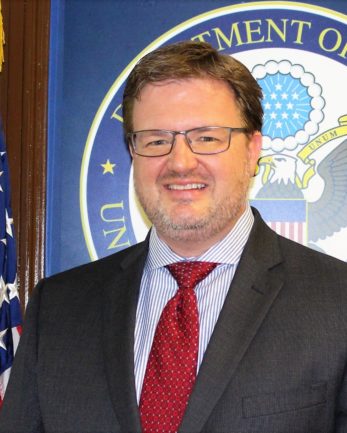 Ben Rockwell arrived in July 2018 as the Deputy Principal Officer in Basrah, Iraq.  Prior to his assignment in Basrah, Ben was the Economic Unit Chief at the U.S. Embassy in Lisbon, Portugal.  He served as Director for Europe & North Africa at the Office of the U.S. Trade Representative from 2012-2014, where he worked on the secretariat of the Chief Negotiator of the Transatlantic Trade and Investment Partnership and directed U.S. trade policy for the Maghreb states.  Mr. Rockwell previously served as Deputy Political Counselor at the U.S. Embassy in Prague, Czech Republic, and was a Transatlantic Diplomatic Fellow with the Czech Ministry of Foreign Affairs.

A career member of the U.S. Foreign Service, Ben has also served overseas in Romania and Guyana.  He has worked in Washington as the State Department’s Coordinator for Fiscal Transparency and in the Office of European Union and Regional Affairs, where he led the Bureau’s response to the 2008 fiscal crisis.  Ben is the recipient of several State Department Superior Honor and Meritorious Honor awards for advancing U.S. foreign policy and economic goals.

A native of Illinois, Ben speaks Czech, Portuguese, and Romanian.  He is a graduate of George Washington University, an Eagle Scout, and an avid Chicago Cubs baseball fan.  Ben and his wife, Sarka, have two children.