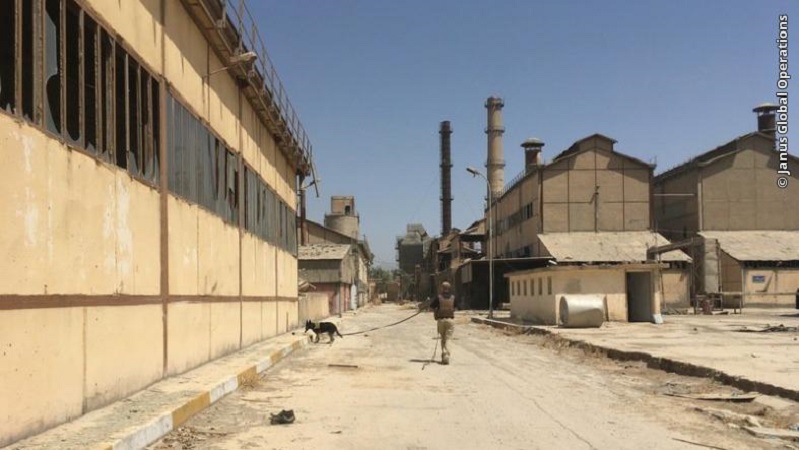 Before ISIS seized territory in northern Iraq, the Hammam Al Alil factory located along the Tigris River south of Mosul was one of the largest bulk producers of cement in the country. The factory produced approximately 1,500 metric tons of cement daily. The cement was used mainly in the immediate area to build industry and for critical repairs to the infrastructure of the nearby hydroelectric dam, which historically provided power to 1.7 million residents in Mosul.

In 2016, when advancing Iraqi government forces pushed ISIS out of the factory, they discovered that retreating ISIS fighters left the site and surrounding area rigged with explosive hazards to target returning Iraqis and disrupt recovery efforts.  U.S. Embassy Baghdad and the Office of Weapons Removal and Abatement in the State Department Bureau of Political-Military Affairs (PM/WRA) contracted with Janus Global Operations, a U.S.-based employee-owned munitions management and demining company, to search and clear the site of these hidden hazards.  Earlier this year, Janus and its local Iraqi partner Al-Fahad began work, carefully surveying the site meter by meter.  By the time they completed the effort in July 2017, Janus and Al-Fahad had searched approximately 340,000 square meters of land, clearing more than 200 explosive hazards and recovering 12,000 kilograms of scrap related to ISIS munitions construction.

The original managers of the factory site have now returned and are finalizing their plans for the rehabilitation of the factory.  Rehabbing and restarting the cement factory to resume its original purpose will offer employment to approximately 570 regular staff, as well as a significant number of casual workers and contractors.  Fortunately, ISIS was forced out of the site with very little battle damage to the facilities other than looting of electrical cables, transformers, and generators.  The site’s management believes that the cement factory could be operating, at least partially, by year’s end.

-Excerpts from the U.S. Department of State Official Blog https://blogs.state.gov/stories/2017/08/02/en/munitions-mortar-helping-restore-iraqi-cement-factory-mosul