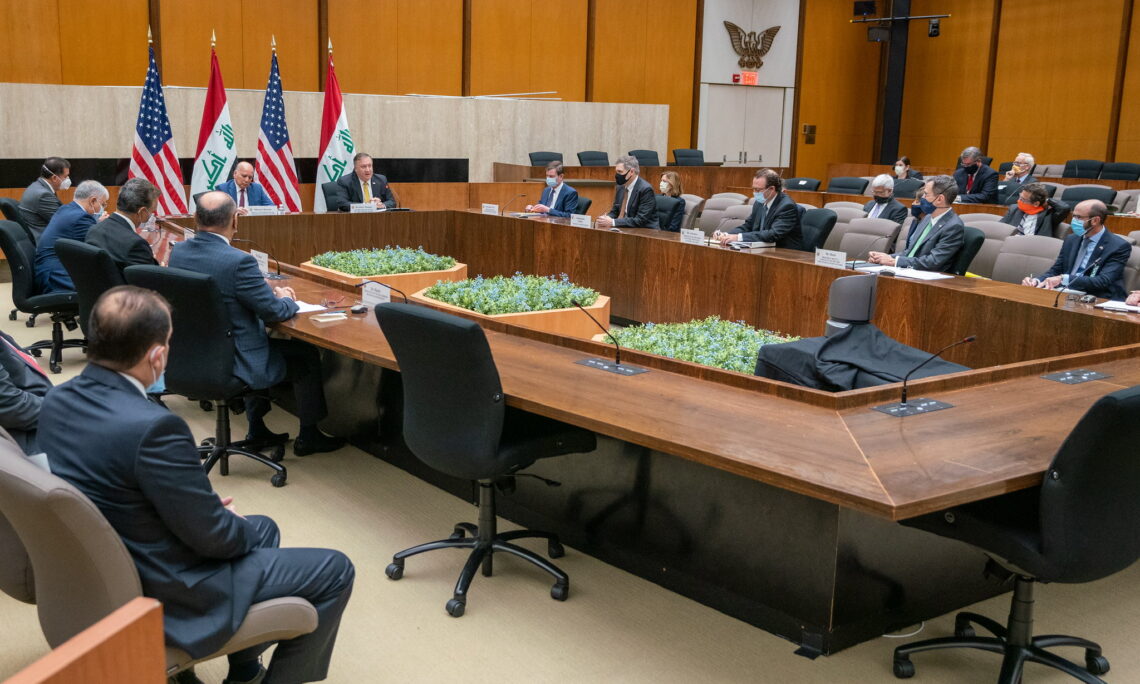 August 19, 2020
Joint Statement on the U.S.-Iraq Strategic Dialogue
The text of the following statement was released by the Governments of the United States of America and the Republic of Iraq.

The Government of Iraq, led by Foreign Minister Fuad Hussein, and the Government of United States, led by Secretary of State Michael Pompeo, held a meeting of the Higher Coordinating Committee today in Washington, D.C. as described in the 2008 Strategic Framework Agreement for a Relationship of Friendship and Cooperation between the United States of America and the Republic of Iraq (SFA). The two sides reaffirmed their commitment to a robust and productive bilateral relationship. Separate sessions covered economics, energy, health and environment, political and diplomatic issues, security and counterterrorism, and education and cultural relations.

In the economic session, Iraq outlined its ideas for economic reform plans that would unleash faster growth and a more vibrant private sector. The United States reiterated its support for Iraq’s economic reforms and identified areas of cooperation that could help Iraq implement its plans. Both countries discussed coordination with international financial institutions to help Iraq recover from low oil prices and COVID-19 and put the country on a more sustainable fiscal path. Both nations plan to cooperate on e-government, financial sector reforms, and private sector partnerships to boost U.S.-Iraq trade and investment. The two governments look forward to holding a Trade and Investment Framework Agreement (TIFA) Council meeting later this year to follow up on the June 2019 meeting.

In the energy session, the United States and Iraq discussed the Government of Iraq’s efforts to increase domestic electricity and gas production, reduce wasteful gas flaring, and implement energy market reforms. The two governments plan to hold an Energy Joint Coordination Committee meeting soon to discuss these topics in more detail. On the sidelines of today’s meeting, the Government of Iraq signed substantial energy agreements with U.S. companies, including General Electric, Honeywell UOP, and Stellar Energy, as well as Memoranda of Understanding with Chevron and Baker Hughes, as concrete examples of the U.S.-Iraq energy partnership. Iraq and the United States noted ongoing cooperation with the International Energy Agency (IEA) to develop plans for electricity tariff reform in Iraq. The two governments plan to continue cooperation with the Gulf Cooperation Council (GCC) member-states and Gulf Cooperation Council Interconnection Authority on Iraq/GCC electricity connections and energy investment. The United States welcomed the progress in the talks between the Iraqi Federal Government and the Kurdistan Regional Government with regard to budgetary and energy issues.

In the health and environmental session, the United States and Iraq noted their ongoing partnership to combat COVID-19 and their intent to sign a Memorandum of Understanding to expand bilateral health trade. The two governments also discussed ongoing cooperation on environmental, water, and scientific issues and plan to hold a separate Joint Coordination Committee meeting on those topics.

In the political and diplomatic session, the United States reaffirmed its respect for Iraq’s sovereignty, territorial integrity, and relevant decisions of the Iraqi legislative and executive authorities. The two sides discussed how the United States could best support the Iraqi government as it prepares for parliamentary elections, including by increasing support for the United Nations Assistance Mission for Iraq. Both nations reiterated their support for freedom of expression and media freedom, and the necessity to hold accountable the perpetrators of violence against peaceful protesters. The United States supports Iraq’s efforts to improve relations with its neighboring states and plans to assist the Iraqi Government in this endeavor. The United States reaffirmed its continued commitment to supporting Iraq in advancing durable solutions for internally displaced persons that are voluntary, safe, and dignified, and to help those communities that have been targeted for genocide by ISIS. The two sides recognized the need to improve access for humanitarian organizations.

In the security and counterterrorism session, the United States and Iraq reaffirmed their commitment to achieving common objectives through bilateral security coordination and continued cooperation between the Iraqi Security Forces and the U.S.-led Global Coalition to Defeat ISIS. The two delegations praised the growing capabilities of the Iraqi Security Forces and their joint success in the fight against ISIS, which has enabled the Global Coalition to transition to a new phase focused on training, equipping, and supporting the Iraqi Security Forces. The Iraqi government expressed its gratitude to the Global Coalition and asserted its willingness to facilitate this transition and confirmed its obligation as host country to provide protection for the Coalition’s personnel and diplomatic facilities in Iraq. Adapting to the requirements of this new phase, the Global Coalition has been able to depart from some Iraqi military bases and reduce combat forces in Iraq. The two sides plan on separate technical talks to manage the timing and transition to the new phase, including any associated redeployments from Iraq. The U.S. and Iraqi delegations recognized the progress of the Iraqi Federal Security Institutions and the Kurdistan Regional Ministry of Peshmerga Affairs in coordinating their efforts to combat ISIS remnants and discussed ways to further this cooperation.

In the education and culture session, the two governments discussed both past and current U.S. support for Iraq’s efforts to strengthen higher education in cooperation with American universities in Iraq, through the Fulbright program, and through the U.S. Embassy’s Higher Education Partnership initiative. The United States and Iraq identified additional ways to support Iraq’s plans to address higher education reform priorities and strengthen U.S.-Iraqi university partnerships. The two sides also reviewed progress in the return of the Baath Party Archives to Iraq as an important artifact of Iraq’s history. The two delegations discussed their mutual efforts to preserve Iraq’s rich cultural heritage and religious diversity and reaffirmed their commitment to cooperating in the return of Iraqi cultural property illegally imported into the United States to their rightful place in Iraq.