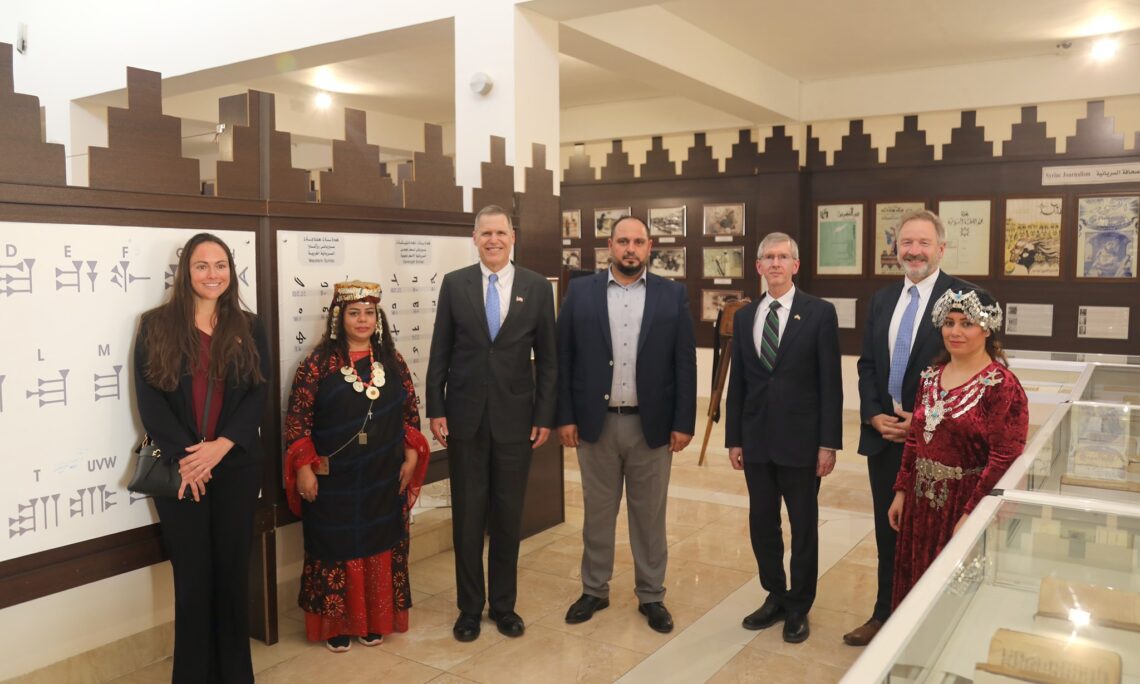 A two-year project to digitize cultural records and build the capacity of local teams to preserve, protect, and uphold Christian and Yezidi heritage in Iraq.

The United States Agency for International Development (USAID) has awarded the Antiquities Coalition a $1 million grant for a new project, “Preserving the Cultural Heritage of Minority Communities of Iraq.” This two-year project is a partnership among USAID, the Antiquities Coalition, and three Iraq-based organizations: the Centre Numérique des Manuscrits Orientaux (CNMO), the Syriac Heritage Museum, and Yazda, that represent minority Christian and Yazidi communities. The expansive and deliberate destruction of cultural heritage inflicted by the so-called Islamic State of Iraq and Syria (ISIS) in 2014 and 2015 sought to wipe out Iraq’s cultural and religious diversity. With USAID funding, the Antiquities Coalition will share their expertise with the three organizations to assist in preserving and protecting Iraq’s unique identities and cultural heritage.

“Iraq is home to some of the most ancient stories known to humanity. The cultural artifacts, traditions, and stories of these diverse communities are irreplaceable, which is what compels us to protect what remains. Preserving and promoting the heritage of different Iraqi communities is a critical step towards communal healing and long-term sustainability,” said John Cardenas, USAID Mission Director in Iraq. Working closely with the teams from CNMO, the Syriac Heritage Museum, and Yazda, USAID and the Antiquities Coalition will help to digitize and conserve thousands of pieces from their collections, including manuscripts, photographs, and other archival materials. The project will also provide training and equipment to the teams to establish digitization labs and document intangible cultural heritage, such as stories, songs, and traditional practices. Finally, with support from USAID and the Antiquities Coalition, the partners will develop online and in-house exhibitions to share these precious artifacts and traditions with the world.

“Each of the partners in our project is dedicated to the preservation of the manuscripts, photos, archives, museum objects, and intangible heritage documentation of these minority communities,” said Antiquities Coalition’s Co-founder and Project Director, Peter Herdrich. “We remember and mourn the genocidal attacks that Yazidi and Christians endured in Iraq at the hands of violent extremists in the very recent past, and know that ensuring the security and continuity of these records is a critical way for us to preserve the cultural heritage of these communities. We could not be more pleased to offer our skills in service to our partners or be more thankful to USAID and the American people for the funding.” The Preserving the Culture and Heritage of Minority Communities in Iraq was developed by the partners through USAID’s New Partnerships Initiative, which taps into the innovation and knowledge of new, local partners to achieve shared objectives. It is administered by the Antiquities Coalition as part of its new initiative, the Coalition for Sustainable Cultural Communities.

The Antiquities Coalition (AC) unites a diverse group of experts in the fight against the illicit trade in ancient art and artifacts. In addition to championing better law, policy, and digital infrastructure, the AC fosters diplomatic cooperation and advances proven solutions with public and private partners worldwide, including the U.S. and foreign governments, law enforcement, archaeologists and the art market and museum leaders. Since its founding in 2014, the AC also prioritizes awareness-raising, developing creative and original content to help policymakers, the corporate sector, and the public better understand the importance of protecting our shared cultural heritage. Its leaders are recognized thought leaders, being published in major publications such as the New York Times, Wall Street Journal, and the Washington Post, testifying before Congress, and briefing the United Nations.

The Catholic Diocese of Mosul’s Centre Numérique des Manuscrits Orientaux (CNMO). Under the guidance of Archbishop Najeeb Michaeel, OP, this collective of young, internally-displaced persons—forced from their ancestral homes by recent conflict—has found and digitized thousands of manuscripts in dozens of collections throughout Iraq.

The United State Agency for International Development (USAID) is the pre-eminent American government development agency, and the leading donor of stabilization efforts in Iraq. Since 2003, USAID has been a major contributor to the U.S. government’s efforts in Iraq, providing targeted assistance supporting those displaced by armed conflict, promoting a more inclusive prosperity and democratic participation, and fostering increased accountability and transparency in governance. Since 2018, the United States has allocated more than $470 million throughout Iraq and the Iraqi Kurdistan Region to support the recovery and longevity of Iraq’s religious and ethnic minority communities

Yazda. This multi-national Yazidi global organization was established in the aftermath of the Yazidi genocide in 2014 to support the Yazidi ethno-religious minority and other vulnerable groups, aiming to prevent future genocides against the Yazidi community and other minorities, as well as to assist them in recovery from the 2014 genocide. From its establishment in Iraqi in 2015, the organization has focused on capacity building and included, trained, and empowered female volunteers, staff leaders, and project managers.

This project is made possible by the generous support of the American people through theUnited States Agency for International Development (USAID). These contents are the responsibility of the Antiquities Coalition and do not necessarily reflect the views of or the United States Government.